Earley St Peter’s Church was consecrated on 14 May 1844, on land donated by Lord Sidmouth, owner of Erleigh Court, in memory of his wife Marianne and with the generous support of many local people including the Palmer family of Holme Park, Sonning.
It was built of grey vitreous brick with stone dressings, slate gabled and coped roofs. St. Peter’s is a Grade II Listed Building, in the Early English cruciform style with a distinctive 76ft tower to the design of John Turner, who donated the stained glass window depicting St Andrew in the south wall of the sanctuary (in recognition of the mother church in Sonning). 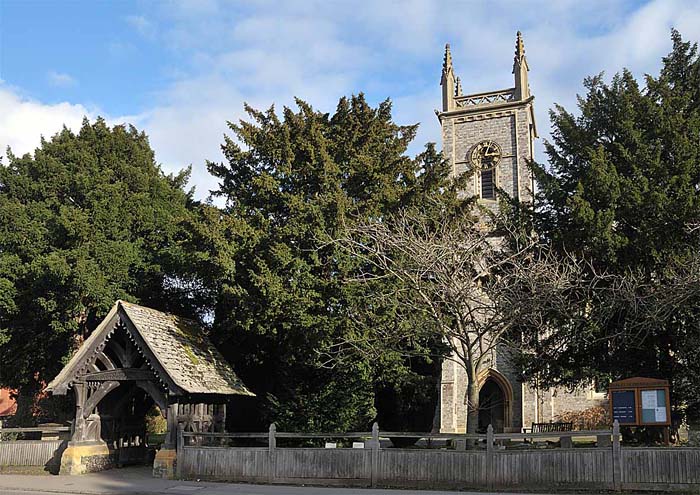 The chancel was rebuilt in c. 1863 together with the addition of the aisles and south porch, to give the church a ‘spacious, towny interior’. The transepts were rebuilt in 1882-3. The south transept was turned into the Lady Chapel in 1912, which was reordered in 1988. The Choir Vestry was added in the 1990s.
The tower is distinguished by its clock which was installed in 1897 to commemorate the Diamond Jubilee of Queen Victoria. It also houses a remarkable set of tubular bells, a carillon, purchased from the Roman Catholic Community of Douai Abbey, Woolhampton, and first rung at St Peter’s on 11th May 1919. 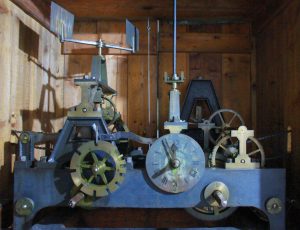 Among the many striking features of the church interior are the frescoes in the sanctuary (painted in 1905) depicting events in the life of St Peter; the round stone pulpit with the heads of the Evangelists; the font, carved with swirling stylised carving; numerous brass memorials and a number of exceptionally fine stained glass windows.

Early church records mention a barrel organ on the small gallery above the main entrance, but what we might now regard as a church organ was not installed until 1868; someone was employed as organ blower at an annual salary of £2!
The current organ, built by S. F. Dalladay in 1910, was donated to St Peter’s as a memorial by the family of Arthur Hill and originally installed in what is now the Lady Chapel. It was moved to its current location on the north side of the chancel in 1912. 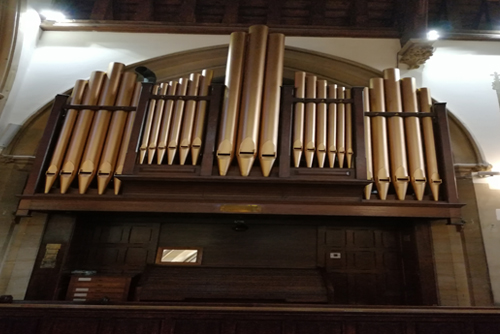 The organ was rebuilt by George Osmond and Company in 1978. Bower and Company, Pipe Organ Builders and Restorers, has maintained the instrument in more recent years and undertook a major overhaul in 2018, to restore the full glory of its magnificent sound and to enhance its external appearance with the repainting of the façade pipes. This refurbishment will ensure that the music tradition of centuries past will continue without interruption in the years ahead.

A gift of ¾ acre of land to the church by John Hargreaves of Maiden Erlegh in 1900, doubled the size of the churchyard, which is now a green and peaceful place of tranquility and reflection in the busy heart of Earley. The graveyard contains about 1,000 gravestones, the oldest dating from 24th November 1845.
The Civic War Memorial, the focus for the Annual Community Act of Remembrance, was restored in 2018 to mark the Centenary of the end of World War 1
The Lychgate, a fine example of Arts and Crafts-influenced carving, was designed by S.S. Smallwood and dedicated as a memorial to Charles Stephens in 1902 for his twenty-four years of continuous service as a churchwarden from 1874 to 1898. 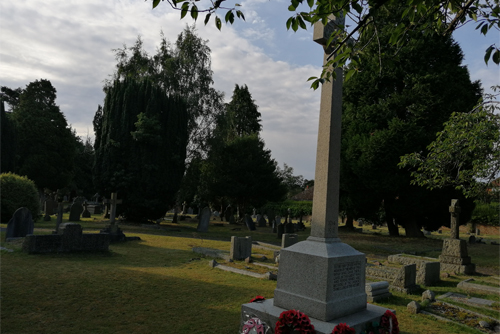 The churchyard has no further space for burial of bodies. Most burials since 1936 have been at the ‘new’ burial ground at May’s Lane. Those who are resident in the Parish or who are on the Church Electoral Roll may apply to have ashes interred in the churchyard.
It may also be possible to inter ashes in the existing grave of a relative buried in the churchyard. A funeral service for your loved one can be conducted either in the church and at a local graveside, or at the Crematorium. The appointed undertaker or the Parish Office will be pleased to offer advice and guidance should it be required.