Like all our services and events, our parish lunch to mark the 75th Anniversary of Victory in Europe has sadly had to be cancelled.  Ways to mark this day at home include:

– At 2.55pm we will live-stream Earley resident Phil Jones playing ‘Last Post’ and ‘Reveille’ on our Facebook page

– Some reflections from Anne and Trevor Bannister are below, let us know if you have pictures or reflections you’d like to share.

Anne Bannister’s father, Grenadier Guardsman George Wyatt, was taken prisoner in defence of Dunkirk on 15th June 1940. This is his recollection of arriving home in England after his liberation in April 1945:

We arrived safely at Oakley airfield, Oxfordshire, and I set foot on English soil for the first time since May 1940. It was a memorable and emotional moment. I devoured the waiting meal with relish before setting off to Beaconsfield in an RASC lorry. On the way we picked up a hitchhiker, who turned out to be a member of the National Fire Service. At first, he was bewildered by this collection of GIs with English accents. When the penny finally dropped with the realisation that we were newly-liberated POWs, he insisted that we stop at the next pub to mark our homecoming.

The fireman strode through the crowded bar and ordered fifteen pints of beer. The sudden appearance of fifteen GIs stunned the locals into silence and they swiftly retreated to the end of the bar, staring at us with icy hostility. Meanwhile, the landlord cheerfully drew the beer and the fireman passed them around. One of the locals eventually plucked up enough courage to speak to us. ‘Are you Americans?’ he asked rather timidly. ‘No!’ shouted the fireman. ‘They’re our boys, back from the war and years in POW camps.’

Hopelessly embarrassed by his mistake, the man turned to his friends and called, ‘Let’s get another round in for these brave lads! Welcome back to England. And it’s a privilege to buy you a drink.’

Anne’s mother, Betty Wyatt (nee Tribe), served in the Women’s Land Army. This is her recollection of VE Day:

A letter was waiting for me on my return to Strathfield House with the best news that any of us could have wished for: a day’s holiday had been declared to mark the end of hostilities with Germany – the day we had all been hoping and praying for had finally arrived!

I was in Wokingham with a van-load of girls from Strathfield House when VE Day was officially celebrated on 8th May. The church bells rang out to announce that the war in Europe was over after six long years. It was hard to take in and I was overcome by a great sense of anti-climax. Most of the girls were wildly excited and eager to enjoy the holiday at Mortimer.  They made their celebrations in the hostel, while I quietly made my way home and spent the day with my family.

The pictures below were taken at a street party in Valentine Crescent, Caversham, where Trevor Bannister’s parents lived and at a celebration ‘fancy dress party’ at St John’s Hall, Caversham. His 18-month old sister is being held in the second picture but sadly his father has been cropped from the image. 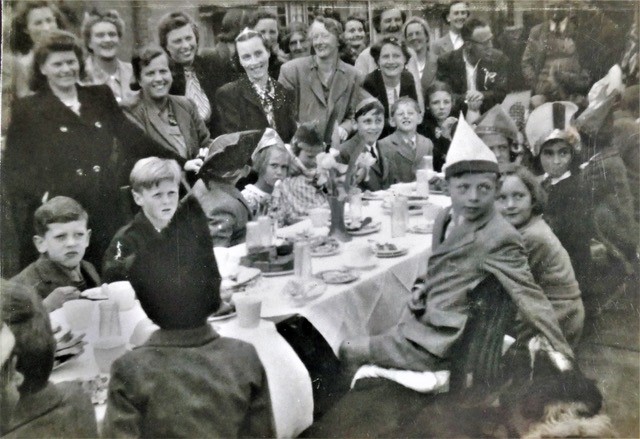 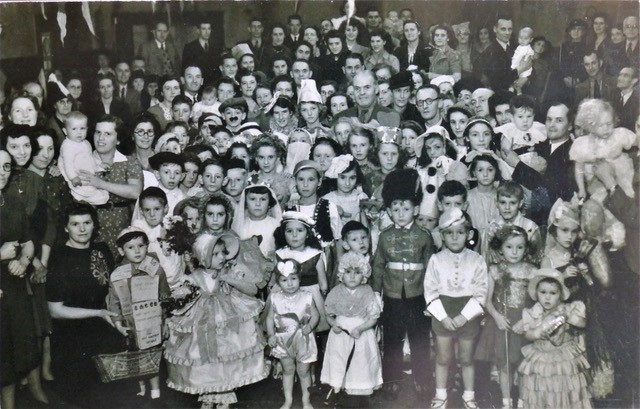